Our show closed last night with another packed house. We cannot express how thankful and grateful we are to everyone who came out to support our second ever production. Our cast, crew, and pit have worked so incredibly hard to bring this story to life over the past six months and as sad as we are to finally say goodbye to it, we are so blessed for all of the support we have received. Make sure to keep an eye out for our next production later in the year!
#unfmtc #IntoTheWoods2019

Our cast was so honored to put on our show for such an adorable audience! And so grateful to have been able to bring magic to them.
Our closing show is tonight at 7:30 p.m. and we hope to see you all there.
#unfmtc #IntoTheWoods2019

Last night was our opening night and we filled EVERY SEAT! That's over 700 people that came to our show to support us and we cannot be more grateful. Thank you to everyone who came out to support us last night, it meant the world to us.
Our final two shows are today. We have a matinee at 2 p.m. and closing performance at 7:30 p.m.
#unfmtc #IntoTheWoods2019

We have witches, bakers, magic, and Princes! Meet Chris Rocanelli, who plays Rapunzel's Prince. Chris is double majoring in Management and Information Systems with a double minor in theatre and political campaigns. He says, “Being a part of Into the Woods has allowed me to bring one of my dream roles to life and be a part of such an amazing and loving group of people”
#unfmtc #IntoTheWoods2019 #7DaysofCastAndCrew
Photo Credit: Lillian Garback

Our show opens TODAY! We cannot express our excitement over finally being able to share all our hard work with you!
For today's #7DaysofCastAndCrew, we introduce Emma Finnegan. You've met our Magic, now meet our Witch! Emma is a communications major focusing on Multimedia Production and says that she "...loves being apart of the show because it creates a wonderful family and I always love being together making something amazing with everyone."
#unfmtc #IntoTheWoods2019
Photo Credit: Lillian Garback

Next up on our #7DaysofCastAndCrew, we introduce our Little Red! Alyssa Billings is a first-year Digital Media and Graphic Design major at UNF, she feels that "Everyone in the cast is so lovely, and they are always there to support you when you need it. They are living proof that no one is alone, and I love them more than words can express."
#unfmtc #IntoTheWoods2019
Photo Credit: Lillian Garback 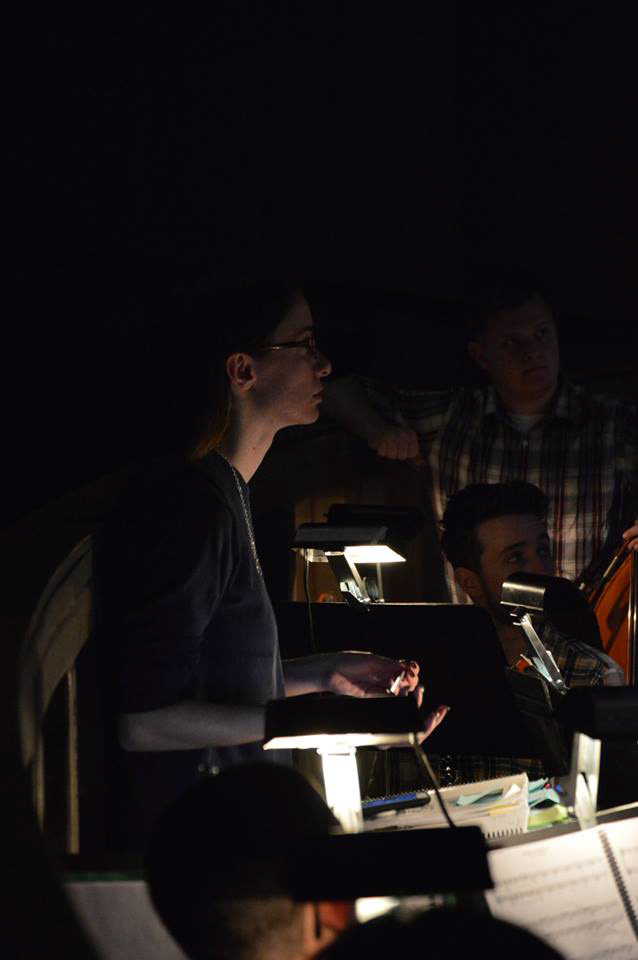 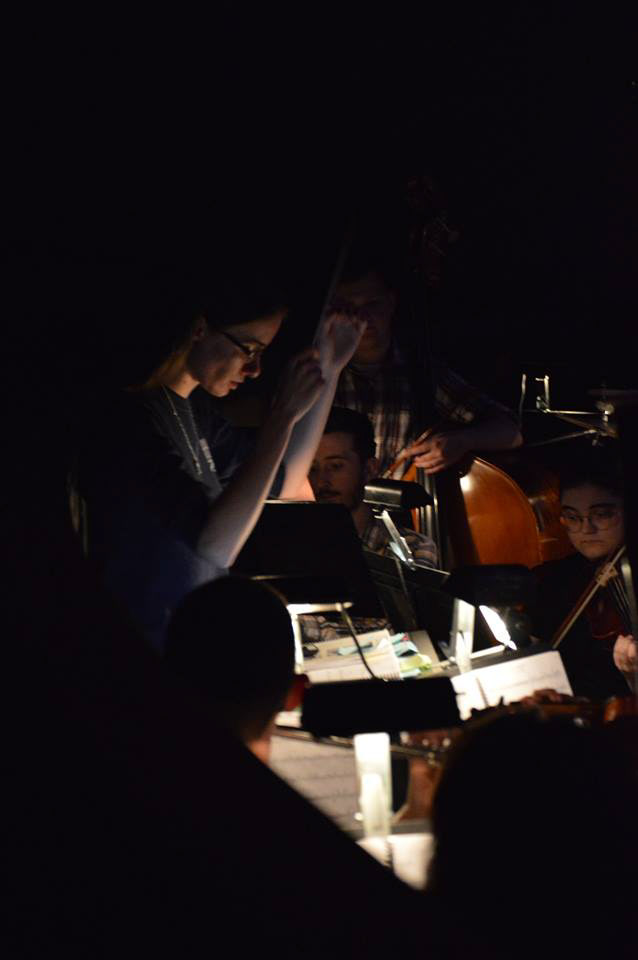 With only 10 hours until the day our show opens, we would like to introduce the conductor of our pit orchestra, Kylie Copeland! Kylie is a Music Education major at UNF and says, "To be perfectly honest, I thought I had officially lost it when I decided to put together a pit orchestra. It took a tremendous leap of faith and a lot of hard work but we made it happen!
I still feel like I’m dreaming- I am so grateful to have the opportunity to work with these fabulous musicians and to accompany such a talented cast!!"
Into The Woods opens tomorrow (01/25/19) at 07:30 p.m. at the Andrew Robinson Theatre located at the University of North Florida.
#unfmtc #IntoTheWoods2019 #7DaysofCastAndCrew
Photo Credit: Lillian Garback

Meet our producer, Little Red and Jack understudy, and club president, Madeline Aquino!
Maddie is one of the co-founders of the Muscial Theatre Club and a biology major with a focus on biomedical sciences.
About Into the Woods, Maddie says: "It has been an incredible experience to work alongside my peers to put on such a big production - it is amazing to think that in just two years this club has grown to this size. Because we don't have a program, we're learning through one another and figuring things out together, and to be so close to opening night...it's truly spectacular."
#unfmtc #IntoTheWoods2019 #7DaysofCastAndCrew
Photo Credit: Lillian Garback

With three days until our show opens, let's meet one of our costume designers! Andrew Ballantyne is an English major at UNF and his involvement in the musical "Is important to me because it was my first time branching away from conventional fashion into costuming a set script and was my first time teching a show rather than acting."
#unfmtc #IntoTheWoods2019 #7DaysofCastAndCrew
Photo Credit: Lillian Garback

You've met our Bakers Wife, now meet our Baker!
Kyle Cohen is an economics major and our very own Baker. About this production, Kyle says
"I'm so thrilled about the experiences and growth that this musical has offered me and my beloved cast-mates."
#unfmtc #IntoTheWoods2019 #7DaysofCastAndCrew
Photo Credit: Lillian Garback 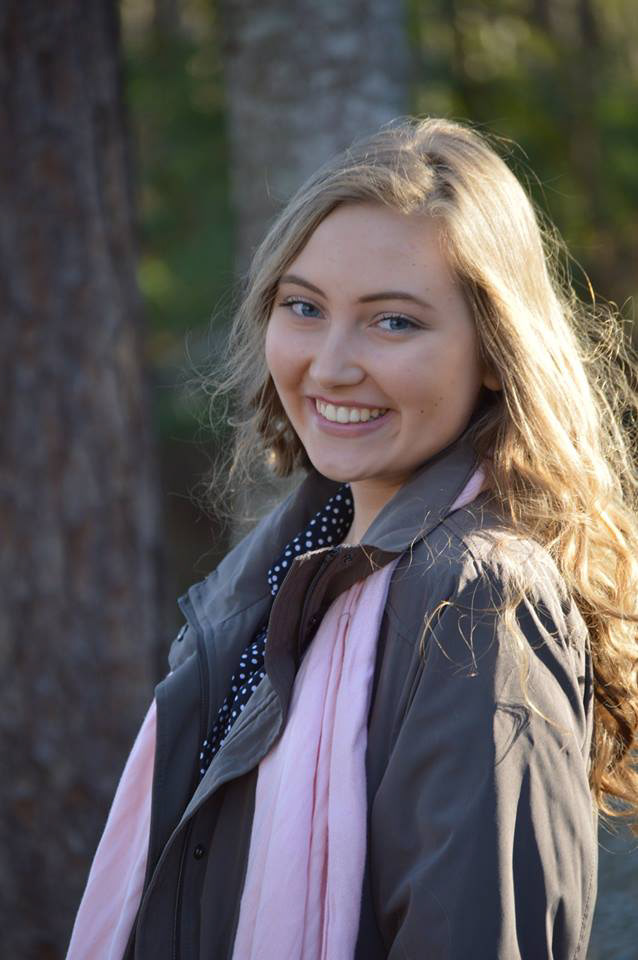 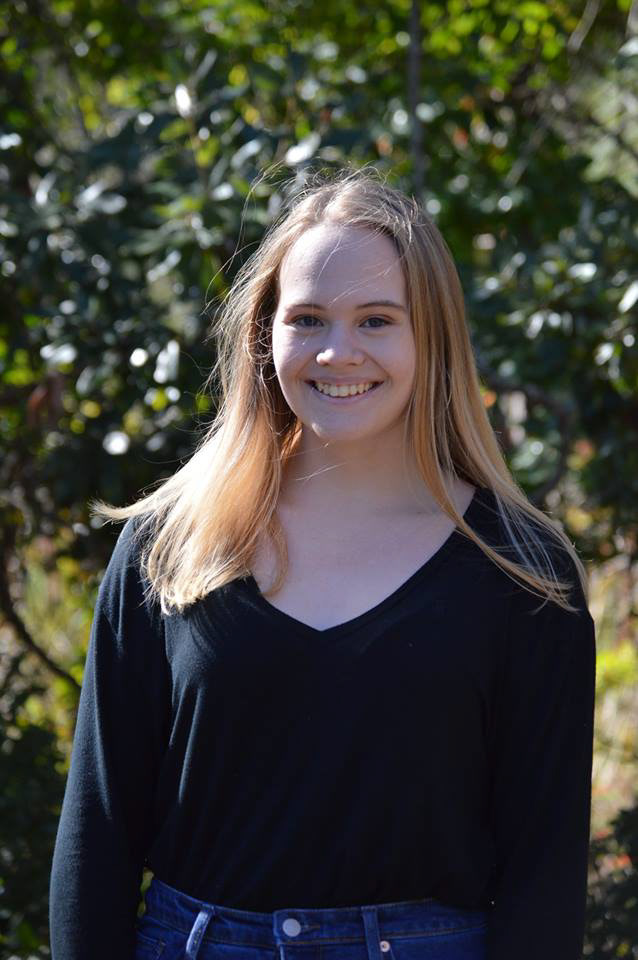 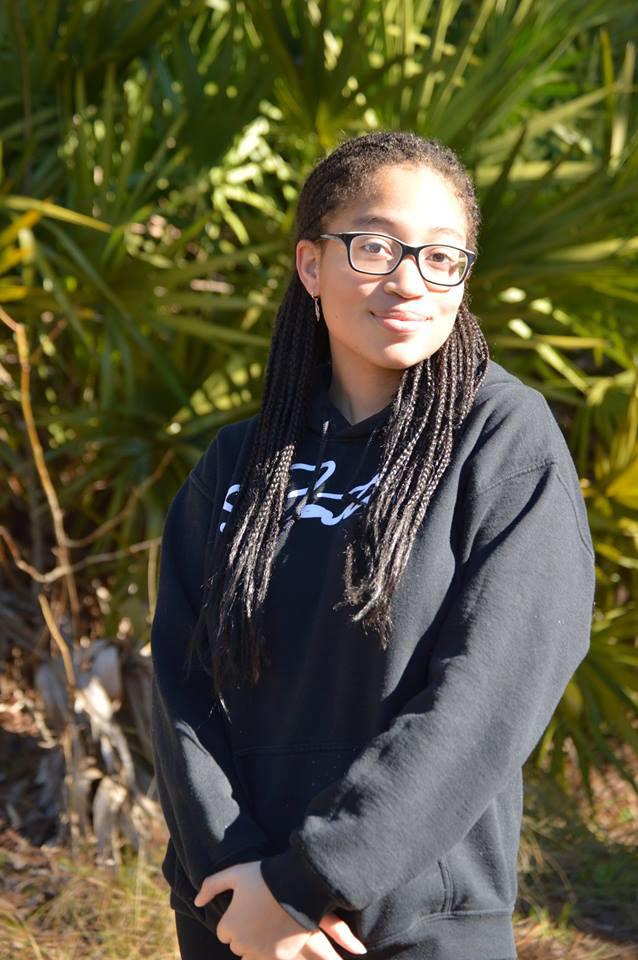 As wonderful as our cast is, Into The Woods wouldn't be possible without our wonderful Director Brittany Nievinski and Assistant Directors, Taylor Hopkins, and Kathleen Powell.
Brittany is a Graphic Design and Digital Media major and Into The Woods is her first musical acting as Director.
Brittany says "I feel so blessed to have had the opportunity to work with such kind, talented, and motivated people. I am so incredibly proud of this show and I can't wait to share the product of our hard work with the rest of UNF and the Jacksonville Community."
Into The Woods opens January 25th at 7:30 p.m. at the Andrew Robinson Theatre located at the University of North Florida. Admission is free, but donations are much appreciated.
#unfmtc #IntoTheWoods2019 #7DaysofCastAndCrew
Photo Credit: Lillian Garback

Today marks 5 days before our show opens. Today, we introduce you to our Magic! Magic is played by Jess Woodman, Dominik Tajti, Rachel Padgett, and Kylie Kidd.
Jess Woodman, an English major, says that "This show has helped me stay connected to my passion for music while struggling through college. Everyone is working so hard to make this wonderful show come to life, and I'm thankful to be a part of it!"
#unfmtc #7DaysofCastAndCrew #IntoTheWoods2019
Photo Credit: Lillian Garback

Today for our #7DaysofCastAndCrew, we introduce our Narrator! The Narrator is played by Gabby Cordova, a biology major currently studying at FSCJ. About her role in the production, she says "This is my very first part in a play- ever! It means so much to me to be a part of this beautiful musical, and to grow close with such talented cast/crew members!"
#unfmtc #7DaysofCastAndCrew #IntoTheWoods2019
Photo Credit: Lillian Garback 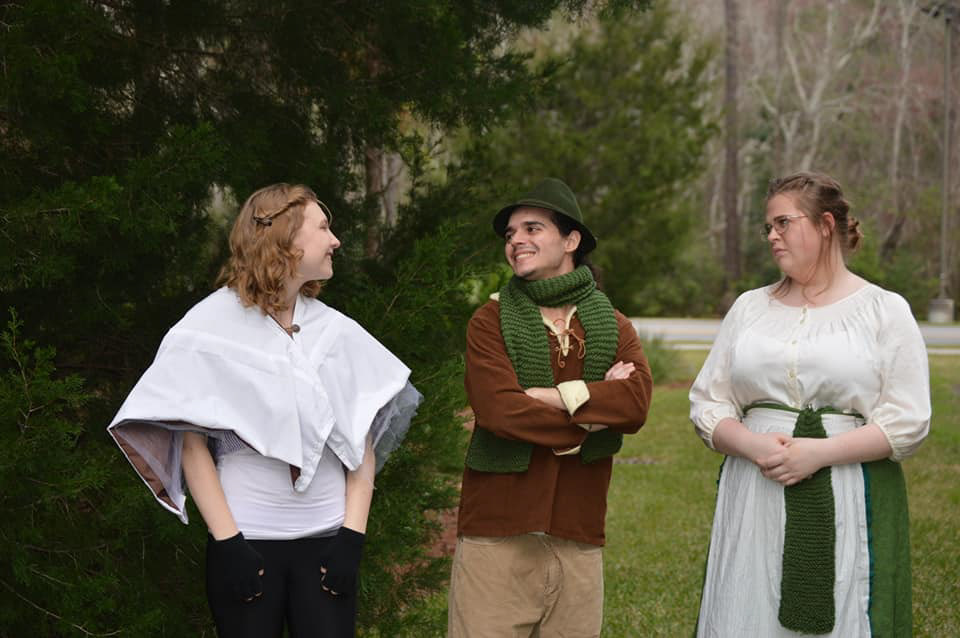 Meet Jack (Alex Rubio), his Mother (Cat Burns), and his cow Milky White (Kirsten Lindemulder)!
Cat Burns is a recent graduate from UNF and was the Director for our first ever performance of 9 to 5 last year, says that being part of this production "[This] is a great opportunity given that I will be going into a more production based career. This show has given me the opportunity to be on stage one last time before I go into the real world."
#unfmtc #IntoTheWoods2019 #7DaysofCastAndCrew
Photo Credit: Lillian Garback

Samantha Powell is a psychology student at UNF. She plays the role of the Baker’s Wife. About her role in this production, she says: "This show has put me out of my comfort zone and opened me up to different opportunities and new people. I grew up watching this show, my dad was in it, and I am so ecstatic to have this opportunity to carry on his legacy. This show is just so beautiful and funny, and has taught me a lot."
#unfmtc #IntoTheWoods2019 #7DaysofCastAndCrew
Photo Credit: Lillian Garback

We are almost one week out from opening night! Our cast and crew are hard at work rehearsing to put on the best production UNF has ever seen! Make sure you come out and see us.
The UNF Musical Theatre club will perform three full-scale, completely student-run productions of "Into The Woods." This musical comedy is based on the musical with music and lyrics by Stephen Sondheim and book by James Lapine that intertwines the plots of several Brothers Grimm and Charles Perrault fairy tales.
Show times are 7:30 p.m. January 25, and 2 p.m. and 7:30 p.m. January 26, at the Andrew A. Robinson Jr. Theater, Building 14A. Admission is free; donations to support the students who have worked so hard to make this show come to life will be accepted at the door.

Student-run musical production of ‘Into The Woods’ at UNF
The UNF Musical Theatre club will perform three full-scale, completely student-run productions of “Into The Woods.” This musical comedy is based on the musical with music and lyrics by Stephen Sondheim and book by James Lapine that intertwines the plots of several Brothers Grimm and Charles Perrault fairy tales.
Show times are 7:30 p.m. January 25, and 2 p.m. and 7:30 p.m. January 26, at the Andrew A. Robinson Jr. Theater, Building 14A. Admission is free; donations to support the students who have worked so hard to make this show come to life will be accepted at the door.
[Amanda Dawson - UNF Public Relations Specialist]

Auditions are coming up fast! Make sure to come out to our audition workshop at the meeting on Monday to prepare

Hello one and all! I have the finalized audition schedule for Saturday September 15th. Please be sure to prepare the necessary parts for what you are auditioning for. Also for the vocal auditions it is not necessary that the work is by Sondheim. See you on the 15th!

Shakespeare in the Park at Nocatee
↑Back to Top

Insert copy here, which should vary depending on your region. Accept